This technology presents opportunities in both quantitative and qualitative analysis. Pixel imaging mass spectrometry (PImMS) yields both a standard time-of-flight mass spectrum and images for each fragment ion, and is compatible with the incorporation of a reflectron for improved mass resolution.

Spatial imaging may be developed for surface imaging or for high throughput multi-sample mass spectroscopy, potentially providing an order of magnitude enhancement to speed, while the velocity imaging mode yields information on the energetics and dynamics of the parent molecule fragmentation process.

Velocity-map images may be analysed to obtain structural information on the parent, or employed as an enhanced molecular fingerprinting strategy. Photodissociation studies of small molecules show that the fragment distributions are highly characteristic of the parent molecule from which they originated. The technology is currently being developed for the study of larger molecules such as peptides and oligonucleotides. 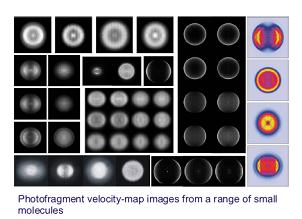 Oxford researchers have developed a new variation on time-of-flight (ToF) mass spectrometry, which uses a modified ion lens assembly and detector to obtain mass-selective images of the spatial or velocity distribution of the ions at their point of formation.

Spatial-map imaging has potential applications in surface imaging, while velocity-map imaging provides a wealth of information on molecular fragmentation processes, particularly when used in combination with common techniques such as ultraviolet photodissociation (UVPD) or electron capture dissociation (ECD).

The key technological advance that has made such measurements possible is the development of ultra-fast imaging sensors, based on CCD or CMOS technology, which allow large numbers of images to be recorded and stored on-chip on the nanosecond to microsecond timescale before readout to a PC at slower data rates.

The Oxford invention is the subject of an international patent application. Oxford University Innovation would like to talk to companies interested in developing the commercial opportunity. Request more information if you would like to discuss this further.