How OUI does social ventures and what they are

If you imagine a spectrum, with mainstream businesses at one end and charities at the other, social ventures sit in the middle. Social ventures are businesses in which they combine commercial business models, but where the venture’s management team are driven by its mission and purpose – the objects. 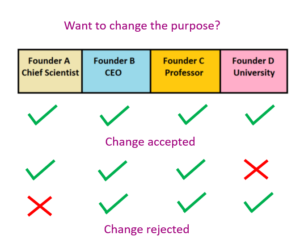 When we launched our support for social business in 2018, we chose to use the phrase social enterprise rather than social ventures. But we have since discovered that not everyone has a commonly agreed definition of what a social enterprise is, so we now prefer to use “social venture” which is a more general term.

One of the key points of contention is an asset lock – a restriction of the ability to transfer money out of the company. We strongly believe that when you form any type of company that the team starting it should know why they are doing so. They should always be able to explicitly state what they are trying to achieve. At the same time, when starting a company it is often difficult to get the “how” right at the very beginning. Looking back through OUI’s archive of 200+ companies, we see that companies often “pivot” which means to change to direction, in the first few years. What the team is trying to achieve remains the same, but the way of getting there changes. This is why we don’t insist on an asset lock when forming a social venture. An asset lock can be easily added later when the company grows.

Another point of contention is the exit or sale of a company. Social enterprises generally put covenants on the company, restricting the team from selling the company to another unless the acquiring company closely matches the objects of the social enterprise. This can prove tricky and may prevent the founding team from their objects, which are often to maximise the positive a new idea can make. Being sold to another company with appropriate checks and balances can be a very effective way of growing an idea’s impact, so we don’t insist that a social venture can only be sold to another. We want our social ventures to maximise their impact first.

A social venture can take many forms. The diagram below shows how the spectrum is chopped up.

Here is a non-exhaustive description of the types of social venture we support.

We are currently investigating BCorps and how we might provide advice and support to our ventures in becoming one.